Big or small - all computers are alike Contact us

No matter what type of computer you are using, a desktop, laptop, smartphone or other device, the basic architecture is the same.  This article will explain the basic components of all computers.

Each of the components will be discussed in details in separate articles. 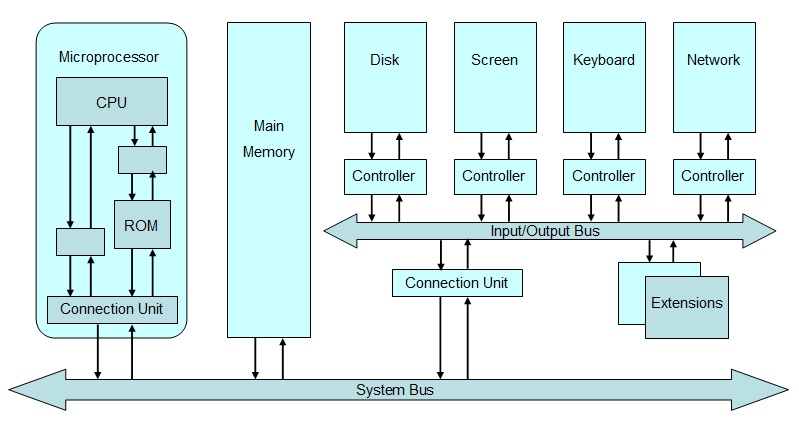 The Central Processing Unit is considered the brains of a computer.  However, the CPU isn’t smart, isn’t  intelligent, isn’t anything other than a machine that can do a few simple tasks.  It can follow instructions.  It can make logical decisions. It can do math. It can move data around.

What makes the computer powerful is it can do these tasks very fast.

Each CPU has a defined instruction set. These instruction sets determine the use of the CPU.  Dedicated devices like thermostats and tv remotes have a very limited number of things they need to do so the instruction set is small and the CPUs are not very fast. General purpose computers like your home PC have to do a lot of different things and do them fast, so their CPUs are faster and have more complex instructions sets.

The Random Access Memory (RAM)  – the memory – is the part of the computer where programs run.  This is not to be confused with STORAGE – the disk drives.

When you start a computer, the operating system (Windows or MacOS) is copied from storage to the RAM by the CPU. The programs are lists of instructions that tell the CPU what to do. Each program that is run has to be in RAM to work. All or some of the data that is needed by the program is also in the RAM.

Every program or app that you open uses the computer’s RAM. The more programs you open, the more RAM is used. When you run low on RAM, the computer doesn’t stop, it takes one of the programs that is running and moves it and it’s data to storage to make room for the newly opened program.  As you switch between open programs, the computer handles moving programs in and out of storage.  This takes extra time and is one of the reasons computers seem to run slowly.

RAM in a computer will lose any information when the computer is shut down and the power is turned off. This is why a computer needs storage

All of the data used by computers is kept in storage. The storage is typically a HARD DRIVE or a SOLID STATE DRIVE.

Unlike RAM – storage devices keep the information even when the power is turned off.

A Hard Drive contains spinning platters – disks – that are coated with magnetic media. As the platter spins, a read/write head move back and forth from the edge towards the center of the platters reading or writing and data on the platter. The spinning disks are why they are called disk drives.

The newer technology is called Solid State Drives (SSD). Instead of moving parts, the SSD contains memory chips – similar to RAM. Compared to a disk drive, the data is written to or read from an SSD much faster than hard drives.

Since hard drives have moving parts, the drives can be damaged when dropped or hit. SSDs are much more stable and immune from damage.

What is RMM? It is a tool that is used to monitor each computer at your business 24 X 7 and using that information, better manage the state of your computers. By checking a dashboard, RSETech sees the status of the critical and important aspects of each PC and, when needed, issues can be immediately remediated. More details on RMM are below – but first…

Why do you need RMM?

Ask yourself a few questions:

You most likely answered YES to each of these questions. For each situation, there is a solution:

All three solutions have two words in common – MONITOR and ALERT.

Now – answer this question for your computers: Would you like to know if your computers are at risk for or have an issue that can cause the computer to fail or operate slowly before it affects productivity?

Your answer should be yes – and that is what RMM does.

The average computer user works happily day to day never concerned with how their PC is working – until it’s not working. Then they scramble to get it fixed hoping that it won’t take long and that they haven’t lost any valuable data. This is called ‘break-fix’.

The computer breaks, you get it fixed.

Computers don’t suddenly break, they degrade over time. During this time productivity drops and the computer typically slows down. When the computer is monitored using RMM the computer status is always known and when issues start they can be resolved before they are noticed and the computer ‘breaks’.

In addition, computer update availability is monitored and security/performance patches are installed when available.